Q. Rev 22 says 14 “Blessed are those who wash their robes, that they may have the right to the tree of life and may go through the gates into the city. 15 Outside are the dogs, those who practice magic arts, the sexually immoral, the murderers, the idolaters and everyone who loves and practices falsehood. Is it not true that all the sinners have gone to hell by that time? Why would they still be outside the city? If outside the city is hell, why would those who wash their robes go in and out of the city?

Also, 5 There will be no more night. They will not need the light of a lamp or the light of the sun, for the Lord God will give them light. And they will reign for ever and ever. What will they be reigning? Will everyone be a king?

A. According to Rev 20:15 And if anyone’s name was not found written in the book of life, he was thrown into the lake of fire, all unbelievers would have been cast into hell by that time.

Let’s dissect v 14-15 to see what it means. First, “wash their robes” is in reference to:
• Rev 7:14 I said to him, “My lord, you know.” And he said to me, “These are the ones who come out of the great tribulation, and they have washed their robes and made them white in the blood of the Lamb.
Washing their robes white in the Lamb’s blood is figurative, not literal.

Second, “tree of life” appears first in Revelation in:
• Rev 2:7 He who has an ear, let him hear what the Spirit says to the churches. To him who overcomes, I will grant to eat of the tree of life which is in the Paradise of God.’
The overcomers are those who persevere and are victorious. Eating of the tree of life means being granted eternal life. I believe it is more figurative than literal.

Third, “dogs” appears 8 times in the NT, here and in:
• Mt 7:6 “Do not give what is holy to dogs, and do not throw your pearls before swine, or they will trample them under their feet, and turn and tear you to pieces.
• Mt 15:26-27 And He answered and said, “It is not good to take the children’s bread and throw it to the dogs.” But she said, “Yes, Lord; but even the dogs feed on the crumbs which fall from their masters’ table.” (See also Mk 7:27-28)
• Lk 16:21 and longing to be fed with the crumbs which were falling from the rich man’s table; besides, even the dogs were coming and licking his sores.
• Php 3:2 Beware of the dogs, beware of the evil workers, beware of the false circumcision;
Except in the parable of the rich man and Lazarus, all 7 references are figurative of the unholy, the Gentiles, the evil workers, the false people of God, the sinners, not literal.

Therefore I believe “outside” does not mean physically outside the city, but figuratively, barred from entering. Rev 22:14 does not say go in and out of the city, only “enter by the gates into the city” (NASB). Nor does Rev 21.

Next, reign. Besides Rev 22:5, believers reigning is taught in:
• 2 Tim 2:12 If we endure, we will also reign with Him; If we deny Him, He also will deny us;
• Rev 5:10 “You have made them to be a kingdom and priests to our God; and they will reign upon the earth.”
• Rev 20:4, 6 Then I saw thrones, and they sat on them, and judgment was given to them. And I saw the souls of those who had been beheaded because of their testimony of Jesus and because of the word of God, and those who had not worshiped the beast or his image, and had not received the mark on their forehead and on their hand; and they came to life and reigned with Christ for a thousand years. Blessed and holy is the one who has a part in the first resurrection; over these the second death has no power, but they will be priests of God and of Christ and will reign with Him for a thousand years.

Rev 5:10 refers to the men and women purchased for God with the Lamb’s blood from every tribe and tongue and people and nation. Rev 20:4, 6 refer to those who were martyred, those who had not worshipped the Antichrist and received his mark. They will reign with Christ during the Millennium.

There are degrees of reward. In Lk 19:13 a nobleman gave 10 of his slaves 10 minas to do business. When he returned, he called them to give an account:
• Lk 19:16-19 The first appeared, saying, ‘Master, your mina has made ten minas more.’ 17 And he said to him, ‘Well done, good slave, because you have been faithful in a very little thing, you are to be in authority over ten cities.’ 18 The second came, saying, ‘Your mina, master, has made five minas.’ 19 And he said to him also, ‘And you are to be over five cities.’

Each slave was given 1 mina, and the reward is proportional to the results. The one who earned more was put in authority over more. I do not know what the specific duties of being “in charge” involves, only that they will reign, some with higher rank. I don’t think everyone will be a king. Some will be barely saved:
• 1 Co 3:14-15 If any man’s work which he has built on it remains, he will receive a reward. 15 If any man’s work is burned up, he will suffer loss; but he himself will be saved, yet so as through fire. 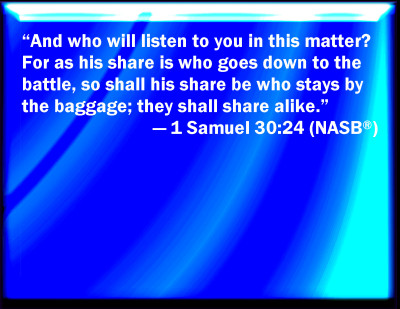 When we share our mission trips with brothers and sisters, sometimes the seniors would tell us, “We love to go too, but we are old and can’t do anything now.” Others say “We like to join you, but we have a full-time job and just can’t get away.” Besides asking them to pray, which is a most vital part of short-term missions, often our response is “If you can’t go yourself, send someone who can. Support them as your representatives. The LORD rewards GOERS and SENDERS alike.”

There is a principle in the OT. While David and his men were away, the Amalekites attacked Ziglag and took their families captive. David pursued until some of his men were too exhausted and remained behind. The others pressed on, rescued their wives and children, and recovered everything, in addition to taking spoils from the enemy. When they distributed the loot, those who fought did not want to share with those who stayed with the baggage. But David said:
• 1 Sam 30:24 For as his share is who goes down to the battle, so shall his share be who stays by the baggage; they shall share alike.

Usually we focus only on the ones who go, but not the Lord. He rewards GOERS and RECEIVERS alike. By extension we believe He rewards SENDERS as well as GOERS. So if you can’t go this time, support others who can. Next time they may support you. All will share in the joy and the reward in serving Kingdom ministry.