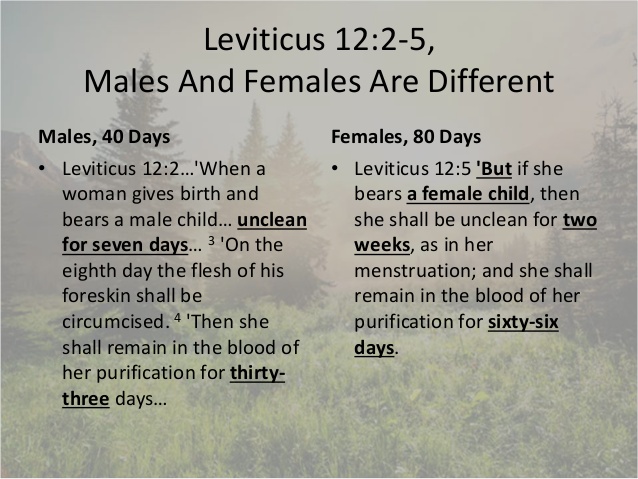 Q. Why is it that a woman is unclean for 7 days when she gives birth to a son, but 14 days for a girl? Gender bias?

A. This is a puzzling passage in Lev 12:

The uncleanness is not due to the birth itself, but the discharge of blood during childbirth, similar to menstruation. The purification period is actually 40 days (7+33) for boys, 80 days (14+66) for girls. Why double for girls? Commentators have suggested various explanations, none quite satisfactory:

• Physiology of boys – Some suggested the “normal” duration for uncleanness for all babies is 14 days, but cut short to 7 days for boys, in order that they can be circumcised on the eighth day. This is so because the coagulation agent in the blood is at its peak on the eighth day, and the boy would heal faster. But if that is so, why isn’t the purification period 40 or 80 days for both when circumcision is not a factor?
• Physiology of girls – Others believed that the babies carry the mothers’ hormones in their system, which may lead to bloody mucous discharge for girls for up to two weeks, but not for boys. This could explain the difference in the unclean duration, but still not the purification period.
• Health for mothers – some commentators turn the negative connotation around by seeing the purification period as giving the mother a maternity leave, allowing her to rest after delivering her child. So the double duration for girls is actually a blessing compared to only half the time for boys.
• Spiritual – Still others suggested that Eve was deceived by the serpent and led Adam to fall, so the duration is double for girls. 1 Tim 2:14 And it was not Adam who was deceived, but the woman being deceived, fell into transgression. While 1 Tim 2:14 is certainly true, the Bible never made a direct connection between this and the double duration.
• Social – Some felt baby girls grow up to be women who in turn give birth to their own babies, whereas baby boys grow up to be men who do not give bear children directly. So the duration is doubled for girls.

As you can see, none of the proposals provide a fully satisfactory explanation. The pagan nations may have a gender bias in favoring boys, but I don’t think God has that prejudice:
• Ga 3:28 There is neither Jew nor Greek, there is neither slave nor free man, there is neither male nor female; for you are all one in Christ Jesus. 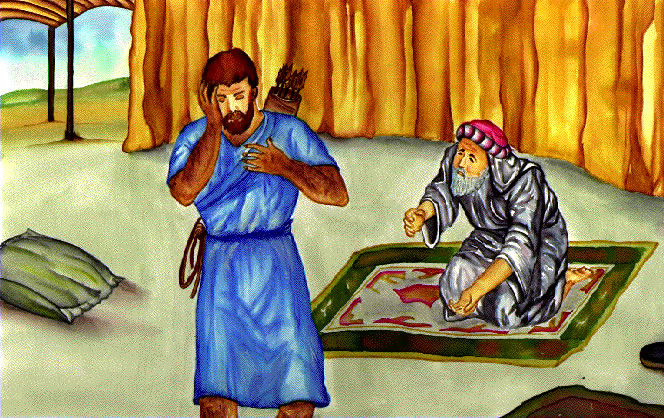 Q. Why would Isaac bless (predict) Esau to break away from Jacob? Isn’t that cursing Jacob with trouble in the future? Maybe that accounted for all the problems in Middle East today? Why was Jacob rewarded for deceiving Isaac and stealing Esau’s blessing?

A. Isaac blessed Esau because he loved him, even though God already told Rebekah “the older shall serve the younger” (Gen 25:23):
• Gen 25:28 Now Isaac loved Esau, because he had a taste for game, but Rebekah loved Jacob.

Despite Isaac’s favoritism, all he could do was to state the negative of Jacob’s blessings for Esau:

Esau: Gen 27:39a Behold, away from the fertility of the earth shall be your dwelling,
Isaac: Gen 27:28b And of the fatness of the earth,

Esau: Gen 27:40b But it shall come about when you become restless, That you will break his yoke from your neck.
Isaac: Gen 27:29b And may your mother’s sons bow down to you.

The best that Isaac could bless Esau with was that he will break Jacob’s yoke from his neck. I do not consider that as cursing Jacob with trouble in the future, as Isaac himself blessed Jacob with “Cursed be those who curse you,” (Gen 27:29). He knew better than to curse Jacob.

I also don’t think Isaac’s prediction or prophecy caused the problems in the Middle East today. The children, representing two nations and two peoples (Gen 27:23), struggled within Rebekah (Gen 27:22) even before they were born:
• Rom 9:11-12 for though the twins were not yet born and had not done anything good or bad, so that God’s purpose according to His choice would stand, not because of works but because of Him who calls, it was said to her, “THE OLDER WILL SERVE THE YOUNGER.”

Jacob was not rewarded for deceiving Isaac and stealing Esau’s blessing. He was blessed because of God’s choice, before they were born and had done anything good or bad. God did not explain His choice, just as He did not explain why He allowed Esau (Edom) to break Jacob’s (Israel’s) yoke from his neck. The election was purely His sovereign choice, and He allowed Rebekah’s and Jacob’s deception to offset Isaac’s prejudice to accomplish His purpose. The Bible did not say anything beyond that, and I can go only as far as the Bible revealed.