Last Sunday we heard a good message on the “Laborers in the Vineyard” in Mt 20:1-16, from a missionary who taught Hebrew and NT in the Philippines. She used the passage to challenge the congregation on responding to God’s call to active service, whether locally or in the mission field.

I touched on this passage 5 years ago, in:
https://raykliu.wordpress.com/2013/08/01/the-last-will-be-first/
when I wrote about “the last will be first”, but the key point is worth repeating.

In the Parable of the Vineyard the landowner represents God, and the laborers represent us. Many Christians question the fairness of God in this parable. Why would He be so generous to those hired last, but strict, perhaps even mean, to those hired early? Actually this is a diagnostic parable, as it tells you more about yourself than you care to know. When you read it, note who do you identify with – those hired early in the morning, or those hired about the eleventh hour. Who you identify with tells you what type of person you really are. Many identify themselves with those who were hired first:

• Mt 20:10-15 When those hired first came, they thought that they would receive more; but each of them also received a denarius. 11 When they received it, they grumbled at the landowner, 12 saying, ‘These last men have worked only one hour, and you have made them equal to us who have borne the burden and the scorching heat of the day.’ 13 But he answered and said to one of them, ‘Friend, I am doing you no wrong; did you not agree with me for a denarius? 14 Take what is yours and go, but I wish to give to this last man the same as to you. 15 Is it not lawful for me to do what I wish with what is my own? Or is your eye envious because I am generous?’

In what way? In that we:
1. View things from what we get out of it; we think we deserve more than the next guy (v 10);
2. Grumble when things don’t turn out as we expected, even though our expectations may be unrealistic and what we agreed to (v 11, 13);
3. See others as not equal to us, as we have contributed more (v 12);
4. Think we have been wronged, that others have short-changed us, when in fact they have not (v 13);
5. Are envious of others’ generosity (v 15).

In short, even though we hate to admit it, we operate more on the basis of works, not grace. We are self-centered. If others work for one hour and get paid one denarius, then surely we who worked 12 hours should be paid 12 denarii, otherwise it’s not fair. Reward is proportional to effort; equal pay for work of equal value. Since the landowner did not do that, he, and by implication God, is not fair. That’s perfect reasoning for a person governed by works. But not God, who is Love and operates by grace.

Have you ever wondered what would happen to the eleventh hour’s laborers’ family if the landowner pays them their due of 1/12 denarius? They would go hungry that day. The poor in those days lived a hand-to-mouth existence. The typical daily wage for an unskilled laborer is 1 denarius, just enough to feed a small family for 1 day. So no work means no pay and no food. The landowner is compassionate towards them, and pays the eleventh hour laborers not what they earned, but a full day’s wage so their families won’t go to bed with empty stomachs. God is gracious and generous but we are not. We are so unlike Him that we should be ashamed of ourselves. But better late than never that we learn to be like our Father. 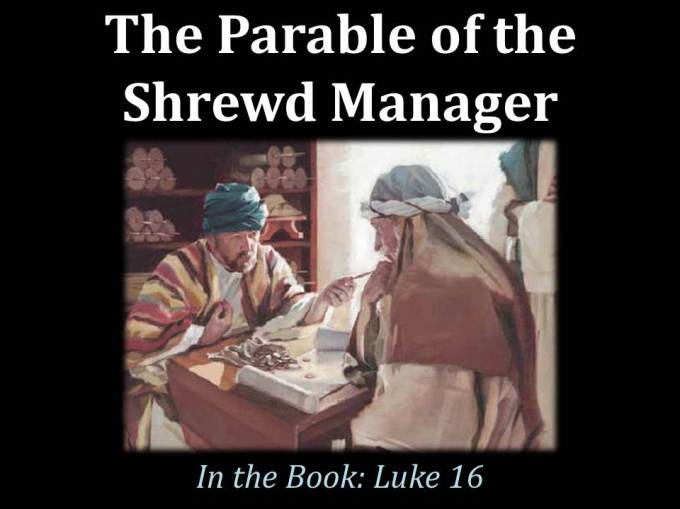 Q. How can Jesus use the unrighteous steward in Lk 16 as a model for us to follow? He squandered his master’s resources and reduced the repayment required from debtors. How can he be an example?

A. That’s a good question. Some commentators argue that a parable has one main point and we need not dwell on the peripherals of the story. They suggest that Jesus was teaching His disciples to make friends for yourselves by means of the wealth of unrighteousness. He was not commending the steward for his dishonesty, but for his shrewdness. The rest of the story does not matter.

I disagree, based on Jesus’ explanation of the parable of the Sower, His basic parable (Mk 4:13). Each element there – the sower, the seeds, the soils, the birds – means something. I am not suggesting that you spiritualize things to force meaning into each and every little detail in all parables, but usually we misinterpret the parables because we do not do enough homework to understand the culture and customs of those times.

Let’s work through the issues. First, the rich man or master. If he represent God, how can he praise his manager? This puzzled many Christians. My opinion is that the master here plays the same role as the unrighteous judge in Lk 18:1-8, as a contrast rather than a comparison to God. There, if the unrighteous judge is willing to give the widow legal protection because of her continual petition, how much more is God willing to answer the prayers of those who kept coming to Him. Here, if the master praises the manager because he acted shrewdly, how much more will God commend the sons of light if we are more shrewd in using wealth to accomplish eternal purposes.