Q. This is a true story from the YouTube. The jihadists told a Christian to denounce his faith or watch his wife getting raped. He killed himself. I don’t think he would have killed himself if the jihadists threatened to kill his wife instead. They may just kill his wife after his suicide instead of raping her. Where would his soul go? Both denying Jesus and killing are sins. I don’t see any way out.

A. Some accept what the jihadists say at face value, that if the Christian denounce his faith then his wife won’t be raped. Others are less trusting and assume the worst based on what the jihadists had done in the past, that they would coerce the Christian to apostatize, rape his wife, then kill them both. You can speculate the outcome; my opinion is that the latter is more likely.

I don’t know why the Christian killed himself, possibly because he made up his mind not to renounce Christ, but could not bear to see his wife raped before his eyes. He believed that to apostatize is worse than death, therefore he committed suicide.
• Heb 10:26-29 For if we go on sinning deliberately after receiving the knowledge of the truth, there no longer remains a sacrifice for sins, but a fearful expectation of judgment, and a fury of fire that will consume the adversaries. Anyone who has set aside the law of Moses dies without mercy on the evidence of two or three witnesses. How much worse punishment, do you think, will be deserved by the one who has trampled underfoot the Son of God, and has profaned the blood of the covenant by which he was sanctified, and has outraged the Spirit of grace?

I have written on Christian suicide before and refer you to my previous post:
https://raykliu.wordpress.com/2012/11/21/where-does-a-christian-who-commits-suicide-go/

Where would his soul go? Since he decided that he would rather die than renounce Christ, he is not an apostate. He has not blasphemed against the Holy Spirit and committed the unpardonable sin. Although he committed suicide or self-murder, he was compelled to do so under threat of violation to his wife. It is forgivable. Therefore my opinion is that he went to be with Christ.

Q. In general Christians are against abortion but abortion is not in the Bible. If my own daughter got raped, I won’t hesitate to support her in getting an abortion. What do you think?

A. The word “abortion” does not occur in the Bible but the idea does. The principle is in “You shall not murder”, which is reiterated 5 times in Ex 20:13; Deut 5:17; Mt 5:21, 19:18 and Rom 13:9. The word “murder” translates:
• the Hebrew verb ratsach, which means to slay, kill, whether premeditated, accidental (manslaughter), as avenger, or intentional, to assassinate
• the Greek verb phoneuo, meaning to kill, slay, commit murder.

Contrary to what pro-choice claims, the fetus is not part of the woman’s body. It has its own DNA distinct from that of his/her mother. According to the Bible, life begins at conception, not after the baby is born:
• Ps 51:5 Behold, I was brought forth in iniquity, And in sin my mother conceived me.
• Ps 139:13-16 For You formed my inward parts; You wove me in my mother’s womb. I will give thanks to You, for I am fearfully and wonderfully made; Wonderful are Your works, And my soul knows it very well. My frame was not hidden from You, When I was made in secret, And skillfully wrought in the depths of the earth; Your eyes have seen my unformed substance; And in Your book were all written The days that were ordained for me, When as yet there was not one of them.
So to kill an unborn baby for the sake of convenience is premeditated or intentional murder, and trespass the sixth commandment.

Having said that, I sympathize with anyone’s wife or daughter who was impregnated when raped. It is not her fault that the violence was forced upon her, nor the fetus’ fault who is simply a passive recipient of the violence. It is the rapist’s fault who should be punished for his crime. So why kill the innocent baby for the perpetrator’s crime?

The victim may not want to raise up an unwanted child, a reminder of the wrong done to her. But why commit a second wrong by abortion, when it can’t rectify the first wrong of rape? Hard as it is to ask, if she does not want the child, can she deliver the child and then give him/her up for adoption? There are many couples lining up to accept and love the innocent child. Can the mom do good by bearing with the pregnancy and then place her child with a loving family? This is redemption by turning a bad thing into good. I hope and pray more would consider it. 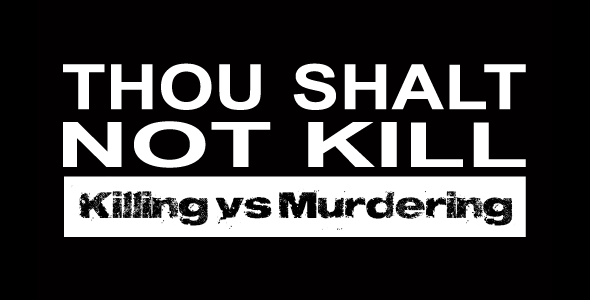 This post is prompted by “Hacksaw Ridge“, but it’s not a review of the film, which is a fine movie. Although I differ from the main character Desmond Doss’ understanding of the sixth commandment “You shall not kill”, I admire his courage in singlehandedly saving the lives of 75 soldiers during WWII’s bloodiest Battle of Okinawa, for which he received the Medal of Honor for actions above and beyond the call of duty.

Doss was a conscientious objector (“CO”), a person who refuses to bear arms in a military conflict on religious or moral grounds. However, he wanted to serve his country in the armed forces, and joined as a medic to save lives, not to kill. He was also a Seventh Day Adventist, and refused to work on the Sabbath. Both convictions were misunderstood by fellow soldiers in his battalion, who viewed him as a coward and can’t be counted on to help when they needed him. So they persecuted him, both physically and verbally to try to get him to quit the army. But he stood firm, which nowadays many are not prepared to do, and for that he earned my respect.

Although the older KJV and ASV chose “kill”, nearly all newer versions (e.g. ESV, HCSB, NASB, NET, NIV, NKJV, NLT, NRSV etc.) chose “murder” as the more accurate rendering. This is because while God gave this commandment, He also ordered capital punishment and allowed going to a “just war” to defend one’s own country:
• Ex 21:12 He who strikes a man so that he dies shall surely be put to death.
• Num 35:16, 17, 18, 31 the murderer shall surely be put to death
• Num 35:19, 21 The blood avenger himself shall put the murderer to death; he shall put him to death when he meets him.
• Num 35:30 ‘If anyone kills a person, the murderer shall be put to death at the evidence of witnesses,
• Lev 24:17 If a man takes the life of any human being, he shall surely be put to death.
• Deut 19:21 Thus you shall not show pity: life for life, eye for eye, tooth for tooth, hand for hand, foot for foot.
• Num 10:9 When you go to war in your land against the adversary who attacks you,
• Prov 20:18 Prepare plans by consultation, And make war by wise guidance.

If the 6th commandment prohibits killing, then God would be contradicting Himself, which He would never do. So by “you shall not kill” He must have meant the premeditated and intentional taking of a human life i.e. murder. That being the case, the CO’s refusal to bear arms to defend his country is not God’s requirement but his own preference. It’s his choice, and using the 6th commandment as justification is not warranted. Still, we commend Doss’ courage. We need more people with conviction like him.