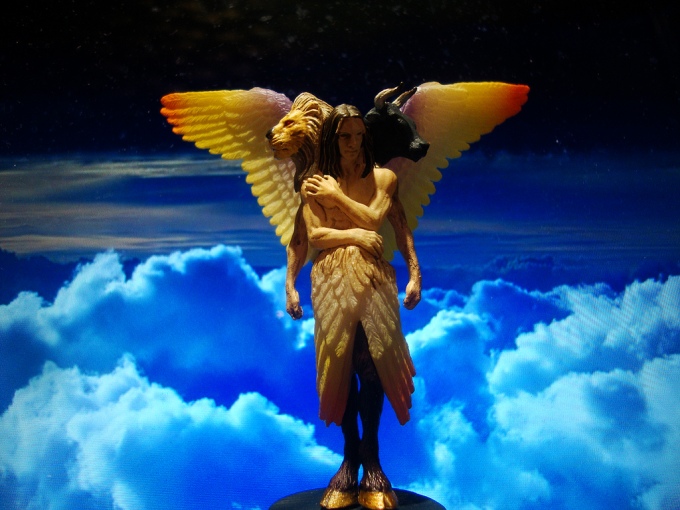 Third, notwithstanding their normally manifesting as men, some ranks have a very unusual appearance e.g. cherubim and seraphim. Cherubim do not look like chubby infants with little wings in Renaissance art. Ezekiel 1 gives a description of four strange-looking living beings, which Ezk 10:15, 20 identified as cherubim.

• Ezk 1:5-11 Within it there were figures resembling four living beings. And this was their appearance: they had human form. Each of them had four faces and four wings. Their legs were straight and their feet were like a calf’s hoof, and they gleamed like burnished bronze. Under their wings on their four sides were human hands. As for the faces and wings of the four of them, their wings touched one another; their faces did not turn when they moved, each went straight forward. As for the form of their faces, each had the face of a man; all four had the face of a lion on the right and the face of a bull on the left, and all four had the face of an eagle. Such were their faces. Their wings were spread out above; each had two touching another being, and two covering their bodies. 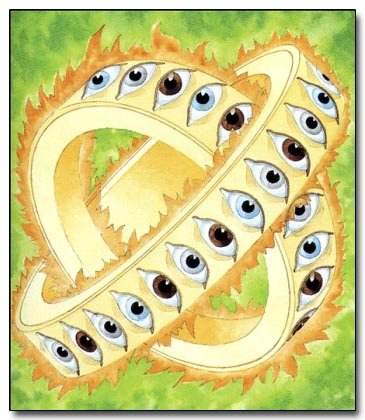 • Ezk 10:12 Their whole body, their backs, their hands, their wings and the wheels were full of eyes all around, the wheels belonging to all four of them.

How big or tall or they? I don’t know whether the statues were life-size, but the cherubim inside the inner sanctuary of the temple were 10 cubits tall, with a wingspan of 10 cubits:
• 1 Kings 6:23-24 Also in the inner sanctuary he made two cherubim of olive wood, each ten cubits high. Five cubits was the one wing of the cherub and five cubits the other wing of the cherub; from the end of one wing to the end of the other wing were ten cubits. (See also 6:25-26; 2 Chron 3:11-13)
A cubit is 18 inches, so they were 15 ft (4.6 m) tall and 15 ft. wide with outstretched wings. That’s huge!

As such their appearance must be frightening or terrifying if they appear all of a sudden. Hope this helps.

A. First of all, angels are spirits who do not have physical bodies. So normally they are invisible to our human eyes.
• Heb 1:14 Are they not all ministering spirits, sent out to render service for the sake of those who will inherit salvation?
• Lk 24:39 See My hands and My feet, that it is I Myself; touch Me and see, for a spirit does not have flesh and bones as you see that I have.”

For example, when the Arameans wanted to capture Elisha, his servant was very afraid when he saw the Aramean army circling the city. Not until Elisha prayed for the LORD to open the servant’s eyes could he see the angels with them were more than the Aramean army:
• 2 Kings 6:16-17 So he answered, “Do not fear, for those who are with us are more than those who are with them.” Then Elisha prayed and said, “O LORD, I pray, open his eyes that he may see.” And the LORD opened the servant’s eyes and he saw; and behold, the mountain was full of horses and chariots of fire all around Elisha. 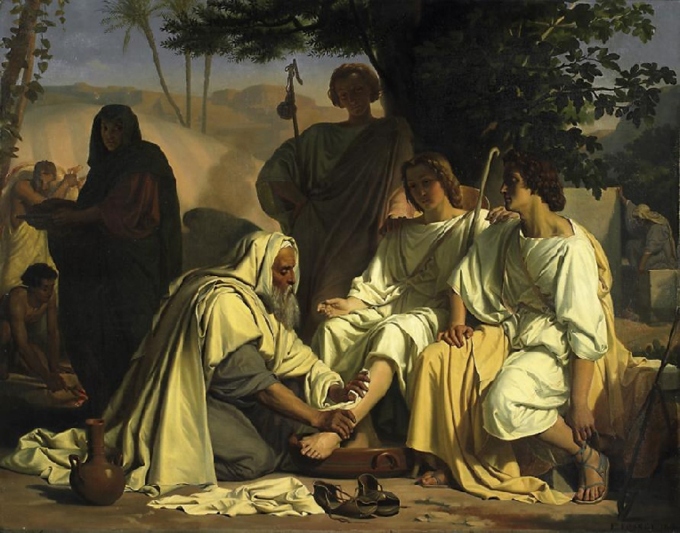 The Angel of the LORD and 2 angels visit Abraham

Secondly, when angels do appear to men, usually they took the form of ordinary men e.g.
• To Abraham – Gen 18:2 When he lifted up his eyes and looked, behold, three men were standing opposite him; …
• To Lot – Gen 19:1 ff Now the two angels came to Sodom in the evening as Lot was sitting in the gate of Sodom. When Lot saw them, he rose to meet them and bowed down with his face to the ground.
• To Mary Magdalene, Mary the mother of James, and Salome – Mk 16:5 Entering the tomb, they saw a young man sitting at the right, wearing a white robe; and they were amazed.
• To the apostles – Acts 1:10 And as they were gazing intently into the sky while He was going, behold, two men in white clothing stood beside them.
• To Cornelius – Acts 10:30 Cornelius said, “Four days ago to this hour, I was praying in my house during the ninth hour; and behold, a man stood before me in shining garments,

Furthermore, they must have looked like any other men, for how else can you entertain them without realizing they are angels?
• Heb 13:2 Do not neglect to show hospitality to strangers, for by this some have entertained angels without knowing it.