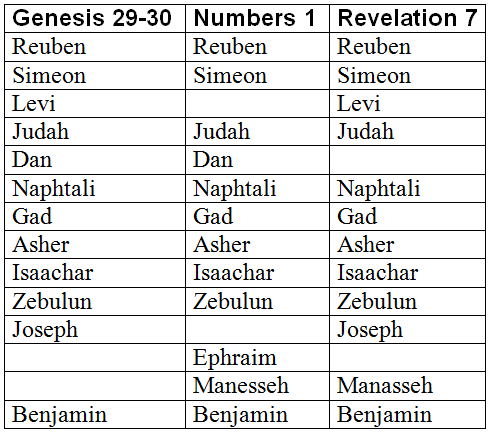 Q. Why is the list of the twelve tribes of Israel in Rev 7:5-8 (Judah, Reuben, Gad, Asher, Naphtali, Manasseh, Simeon, Levi, Issachar, Zebulun, Joseph, Benjamin) different from other places in the Bible? Where is Dan? What about Ephraim?

A. The list in birth order includes Levi, Dan and Joseph. However, Israel loved Joseph more than all his sons (Gen 37:3), and gave him a double portion for his inheritance by adopting Joseph’s sons as his own:
• Gen 48:5 Now your two sons, who were born to you in the land of Egypt before I came to you in Egypt, are mine; Ephraim and Manasseh shall be mine, as Reuben and Simeon are.

In Rev 7, both Dan and Ephraim were dropped because of idolatry:
• Judg 18:30 The sons of Dan set up for themselves the graven image; and Jonathan, the son of Gershom, the son of Manasseh, he and his sons were priests to the tribe of the Danites until the day of the captivity of the land.
• 1 Kgs 12:28-29 So the king consulted, and made two golden calves, and he said to them, “It is too much for you to go up to Jerusalem; behold your gods, O Israel, that brought you up from the land of Egypt.” He set one in Bethel, and the other he put in Dan.
• 2 Kgs 10:29 However, as for the sins of Jeroboam the son of Nebat, which he made Israel sin, from these Jehu did not depart, even the golden calves that were at Bethel and that were at Dan.
• Hosea 4:17 Ephraim is joined to idols; Let him alone.

Bethel was allotted to Ephraim:
• Josh 16:1 Then the lot for the sons of Joseph went from the Jordan at Jericho to the waters of Jericho on the east into the wilderness, going up from Jericho through the hill country to Bethel.
So Dan housed the graven image and together with Ephraim the golden calves which led Israel into idolatry and were disqualified. Joseph therefore replaced Ephraim to retain the double portion. Dan was replaced by Levi, possibly because land inheritance is no longer the issue and the Levites will share in eternal blessings.
• Heb 7:11 Now if perfection was through the Levitical priesthood (for on the basis of it the people received the Law), what further need was there for another priest to arise according to the order of Melchizedek, and not be designated according to the order of Aaron?