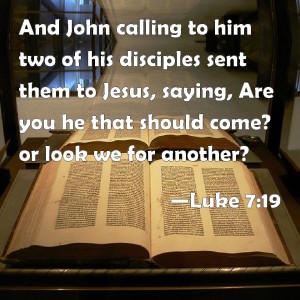 Q. When John the Baptist baptized Jesus he already knew He was the Savior. If that is the case why then did he have to send his own disciples out to ask if He is the One again?

A. Yes, John already knew Jesus is the Lamb of God and Son of God:
• Jn 1:29, 34 The next day he saw Jesus coming to him and said, “Behold, the Lamb of God who takes away the sin of the world! … I myself have seen, and have testified that this is the Son of God.”

The first clue is in the parallel account in Mt 11:
• Mt 11:2-3 Now when John, while imprisoned, heard of the works of Christ, he sent word by his disciples and said to Him, “Are You the Expected One, or shall we look for someone else?”

John had been put in prison by Herod since Mt 4:12 (see also Mk 1:14; Lk 3:20), so he had been languishing in jail for months. The Jewish expectation of the Messiah at that time was that He would be a political deliverer, rescuing Israel from Roman oppression. Being in prison, John was discouraged and confused. If Jesus were the Messiah, why hasn’t He destroyed the forces of evil, delivered Israel, and judged all unrighteousness? As a minimum, why has He left His forerunner (Lk 1:17) in prison? It is the same with us, when we are going through difficulties and discouraged, we often forget and doubt what we knew to be true. So John sent his disciples to seek reassurance.

Jesus reminded John of the works of the Messiah predicted in the OT:
• Isa 29:18 On that day the deaf will hear words of a book,
And out of their gloom and darkness the eyes of the blind will see.
• Isa 35:5-6 Then the eyes of the blind will be opened And the ears of the deaf will be unstopped. Then the lame will leap like a deer, And the tongue of the mute will shout for joy.
• Isa 61:1 The Spirit of the Lord GOD is upon me, Because the LORD has anointed me To bring good news to the afflicted; He has sent me to bind up the brokenhearted, To proclaim liberty to captives And freedom to prisoners;

Even someone as great as John was influenced by expectation of the masses. The remedy is always to go back to Scripture – What does the Bible say, not what everyone thinks. Furthermore, when studying the Bible, look at the total picture, not just what some passage say, or you might misinterpret by leaving out key elements. When you are in the dark, don’t doubt what you knew as truth in the light.