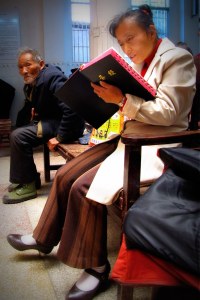 Last Sunday we received an urgent call from a former church member C. (name changed), asking whether we could visit her parents before her mom goes for surgery next week. They are in their mid to late 70’s, with health issues.

The mom had been a staunch Taoist, even pledging herself to be a disciple of Zhang Daoling, the first Celestial Master (張天師) in second century BC. However, when she had a near fatal illness nearly 10 years ago, she professed faith in Christ, but hesitatingly, as her husband was not a believer. He had been a businessman in Hong Kong (HK), but does not believe in any religion. Both retired and emigrated to Canada to live with their daughter in 1997, when HK was repatriated to China.

Two weeks earlier the church caring team had visited them to share the gospel, inviting them to trust in Christ alone for their salvation. The mom said she already believed in Jesus, but will follow her husband’s decision as head of the household, as many older Chinese wives are accustomed to do. The dad said he also believes in Jesus, otherwise why would he follow his daughter to church every Sunday? But he cannot trust in Jesus alone, since previously he followed Master Zhang and could not be disloyal. The team explained that Christianity is exclusive and that he could not put his faith in both, but he wouldn’t budge, as disloyalty is a grave sin with dire consequences. That’s when someone suggested C. contact us.

Prior to our appointment the team explained to us how their meeting went, so we were aware of the impasse. What the team said was correct, but there is a better way to present the truth to avoid the deadlock. After inquiring about their health to establish rapport, we transitioned to the gospel. We agreed with him that loyalty is important. Just as in a marriage the partners need to be faithful to each other and not leave room for a third-party, so in matters of faith one should commit wholeheartedly and not have divided loyalties. However, important as that is, there is an even more important issue to be resolved first. And that most important thing is to determine who the one true God is, and commit to Him alone and no one else.

We explained to him that in time past many Chinese did not know any better as they had not heard the gospel. They followed blindly the beliefs of ancestors without questioning, and were conned by demonic deception such as healing from a sickness or winning a fortune. Little did they realize that these are like sugar-coated poison, because the cost is to forfeit their soul (Mt 16:26; Mk 8:36; Lk 9:25). So the priority is to find out who the true God is, and then commit to follow Him only. He was a businessman and understood right away Satan’s tricks to lure people to follow him, so we invited them to settle their commitment once for all, which they accepted. After further clarification questions we asked them to pray to tell Jesus their commitment to trust Him alone. All were glad as we welcome them into God’s family. Hallelujah!

The gospel never changes, but how you present it can vary with the need. Always be ready to share with anyone, any place, anywhere. You’ll be glad you did, just as there is joy in the presence of the angels of God over one sinner who repents (Lk 15:10).