One of the most remarkable attractions we visited was the Hopewell Rocks, with the highest tides in the world. At low tide we walked on the ocean floor, but at high tide the water rose 50′ to cover the entire rocky beach such that you can only paddle a kayak under the un-submerged upper part of the arches.

How did the Hopewell Rocks become that way? I have embedded a video from Brainstuff that explains how tides work.

How Do Tides Work?

But the gravitational pull of the moon and the sun work on the whole earth, and the average tide worldwide is only about 3′ high. How did the Hopewell Rocks become #1 with 50′ tides? That is the contribution of the way the seabed of the Bay of Fundy, where the Hopewell Rocks are located, is shaped. At the entrance to the bay in the SW, the bay is deeper and wider. Towards the NE, the bay gets shallower and narrower. As the moon’s gravitation pulled and the earth’s rotation swung the water towards Cape Hopewell in the NE, the same volume of water occupying a lesser area would pile higher, thus magnifying the height of the tides. 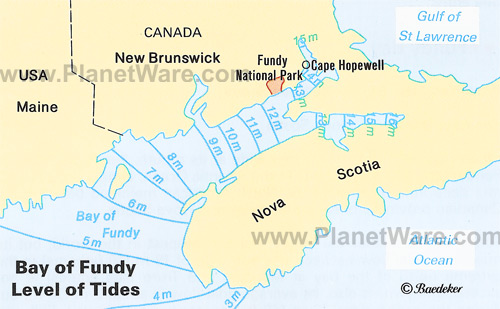 And how did the Hopewell Rocks become such a tourist attraction? Not just because of the tides, but also because of the way the flower-pot rocks look. The rocks became that way due to the tides slowly eroding the softer rock at the base, exposing the harder rock as the “neck”, and leaving the un-submerged rocks in tact as the “head”. The rocks became a big “draw” by giving itself away. Eventually the erosion may be so severe that the “head” will collapse, as some rocks already have.

There is a spiritual lesson here. I know the bay and the rocks are inanimate and can’t actively contribute anything, but here’s my rough analogy. The tides are like the sun and the rain that work on everybody:

• Mt 5:45 so that you may be sons of your Father who is in heaven; for He causes His sun to rise on the evil and the good, and sends rain on the righteous and the unrighteous.

But the topography of the sea basin is like the gifts, passions, abilities, personality and experiences He had uniquely given to each of us. If we cooperate with what God had planned for us, we will be successful, just as the Hopewell Rocks became #1 when the tides and the shape reinforce each other. The way God had shaped us is our competitive advantage.

But there is a second parallel. Just as the rocks were eroded to become a tourist attraction, and John the Baptist was burning away so that people gather to watch:

• Jn 5:35 He was the lamp that was burning and was shining and you were willing to rejoice for a while in his light.

we shine for Christ by giving our life away. The question is are you willing? Am I willing? Something for you and I to ponder.