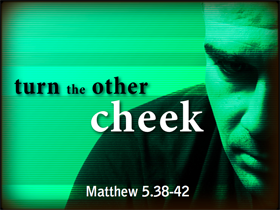 Q. What does Matt 5:38-42 “turn the other cheek” mean as applied to our time? A commentator says Jesus was showing the lower social strata how to live under Roman rulers. I have been told that it means not to retaliate against the evil doer or do not be overcome by evil, but overcome evil with good. Rom 12:21

Taking it literally and applying it to present time, I think there are other Christian ways to avoid the confrontation. The peacemaker in Matt 5:9 would apologize or say something diplomatic to the evil doer who would then stop hitting. If the evil doer hits without any reason, the peacemaker could run away to avoid further confrontation and harm. To offer the other cheek is a provocation, daring the evil doer to hit again. Am I off the track?

Give the outer garment – Jesus says to keep the laws of the country. By giving into lawlessness would be contradicting the law!?

A. First note the context. Jesus’ instructions were to contrast what the OT law said, which the Pharisees misinterpreted (5:38), with what God wanted (5:39-42). So what was originally intended?

The law’s intention was to:
• Fit the punishment to the crime,
• Limit the punishment to the crime, to control excesses.
It was the guide given to judges to execute justice. The Pharisees, however, misapplied it to individuals taking matters into their own hands. Sinful men have a tendency to revenge. The extreme example is Lamech, who wanted to avenge seventy-sevenfold:
• Gen 4:23-24 Lamech said to his wives, “Adah and Zillah, Listen to my voice, You wives of Lamech, Give heed to my speech, For I have killed a man for wounding me; And a boy for striking me; If Cain is avenged sevenfold, Then Lamech seventy-sevenfold.”
The Pharisees turned this law into an obligation for the victim to demand his rights to retaliate. The OT law was actually good in restricting going overboard, but the Pharisees turned it into a duty to avenge oneself.

Now what did Jesus mean? Let’s read the text in
• Mt 5:38-42 “You have heard that it was said, ‘AN EYE FOR AN EYE, AND A TOOTH FOR A TOOTH.’ But I say to you, do not resist an evil person; but whoever slaps you on your right cheek, turn the other to him also. If anyone wants to sue you and take your shirt, let him have your coat also. Whoever forces you to go one mile, go with him two. Give to him who asks of you, and do not turn away from him who wants to borrow from you.

First, what Jesus didn’t mean in v 39. He could not have meant let an evil person do whatever he wants unchecked, because that would have been contrary to God’s nature to judge sin. It also contradicts what He Himself did while on earth e.g.
• Jn 2:14-15 And He found in the temple those who were selling oxen and sheep and doves, and the money changers seated at their tables. And He made a scourge of cords, and drove them all out of the temple, with the sheep and the oxen; and He poured out the coins of the money changers and overturned their tables;

Then what did He mean? Notice the details “slaps you on the right cheek”. The average person is right-handed. For him to slap you on the right cheek he would have to slap you back-hand, which was a great insult in Jesus’ days. According to
Mishnah Bava Kamma 8:6 (Jewish oral tradition) One who slaps his fellow, he gives him two hundred zuz; with the back of the hand, he gives him four hundred zuz.
i.e. the fine is doubled.
The issue was not just physical assault, but contempt. Jesus was asking His disciples not to retaliate against personal insult, but to leave it in God’s hands.