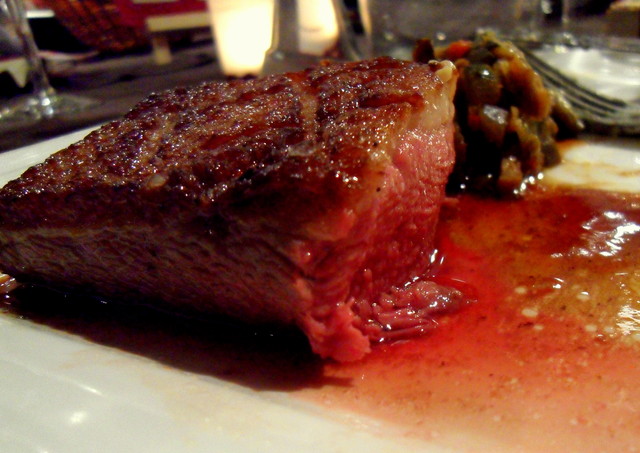 Q. I like my steak rare. I also enjoy “pig red” (pig’s blood) congee. But Gen 9:4 says “Only you shall not eat flesh with its life, that is, its blood.” So can Christians eat blood?

A. There are opposing views. On the one hand, some claim there are no problems because:
• Mk 7:19 because it does not go into his heart, but into his stomach, and is eliminated?” (Thus He declared all foods clean.)
• Acts 10:15 Again a voice came to him a second time, “What God has cleansed, no longer consider unholy.”
• Rom 14:14 I know and am convinced in the Lord Jesus that nothing is unclean in itself; but to him who thinks anything to be unclean, to him it is unclean.
• Rom 14:20 Do not tear down the work of God for the sake of food. All things indeed are clean, but they are evil for the man who eats and gives offense.
• Col 2:16 Therefore no one is to act as your judge in regard to food or drink or in respect to a festival or a new moon or a Sabbath day

According to them, blood is clean, and Christians are not bound by OT laws, but live under grace. So they can eat it if they want to. It is not a sin.

Both cite Scripture. Who is correct? While I believe we live under grace and not law, my position is in between. And I am not being wishy-washy. Here’s why:

Q. Many years ago my uncle gave me an ivory-head statue. I was told it had been prayed over in a Buddhist ceremony (開光). It is more than 50 years old, about 1 ft. x 10 in. diameter. Since it is very difficult to destroy ivory, it has been kept in my closet. Is it proper for me to donate it to the museum, or should I just bury it in my back yard? I have other carvings too which I have taken as art pieces. This particular one gives me a creepy feeling. It is just a piece of very dead ivory. Am I being superstitious? Some have suggested that even colored candles, a sword with a dragon head, Chinese dragon statues are satanic doorways.

A. Your problem has bothered many people who came out of an idol-worship background. First, let me give you the biblical teaching on the subject:

• Acts 15:20 but that we write to them that they abstain from things contaminated by idols and from fornication and from what is strangled and from blood. (Also 15:29)
• Acts 21:25 But concerning the Gentiles who have believed, we wrote, having decided that they should abstain from meat sacrificed to idols and from blood and from what is strangled and from fornication.
• 1 Co 8:4, 7 Therefore concerning the eating of things sacrificed to idols, we know that there is no such thing as an idol in the world, and that there is no God but one. … However not all men have this knowledge; but some, being accustomed to the idol until now, eat food as if it were sacrificed to an idol; and their conscience being weak is defiled.
• 1 Co 10:19-20 What do I mean then? That a thing sacrificed to idols is anything, or that an idol is anything? No, but I say that the things which the Gentiles sacrifice, they sacrifice to demons and not to God; and I do not want you to become sharers in demons.

At first it seemed Paul was contradicting himself in 1 Co 8 and 10, but he did not. There is only one God (1 Co 8:6; Eph 4:6; 1 Tim 2:5). All idols are only “so-called gods” (1 Co 8:5); they are not really lesser gods at all. However, not all people have this knowledge (1 Co 8:7), and demons take advantage of man’s ignorance and superstition by impersonating as gods behind the idols to deceive people. So what is sacrificed or dedicated to idols are in fact directed to demons (1 Co 10:20), not gods as the pagan worshippers thought.

That’s the knowledge part of the teaching. The other part has to do with love. Paul knew that idols are nothing. He knew that we are neither the worse if we do not eat [food sacrificed to idols], nor the better if we do eat. (1 Co 8:8) But he cautioned us to take care that this liberty does not somehow become a stumbling block to the weak. (1 Co 8:9) His bottom-line is “if food causes my brother to stumble, I will never eat meat again, so that I will not cause my brother to stumble.” (1 Co 8:13) His love for his weaker brother overrides his freedom to eat meat sacrificed to idols, though he has perfect right to do so. This is consistent with the teaching in Acts 15 and 21.

How does that apply to your case? As you yourself pointed out, the statue is just a piece of dead ivory. Monks have prayed over it and devoted it to Buddha, and demons may or may not have associated themselves to it. We just don’t know for sure. Since your conscience bothers you, for your conscience’s sake I urge you to get rid of the statue. Do not give it away to friends or relatives, even if they are unbelievers, as it would become a stumbling block to them. I don’t think donating it to a museum to be admired is a good idea either.

In the OT idols are uniformly cut down, smashed and broken e.g. Ezk 6:6; Micah 1:7. Since ivory is difficult to destroy, you can do what Dr. Sun Yat-Sen did when he was young – he broke off the arm of an idol to demonstrate that it can’t even protect itself. First pray for God’s protection from any harm to you or your family for doing the right thing. Then break any weak part of the statue as a symbol of God’s power over evil. Lastly bury the broken pieces on land or in a lake where others can’t use it again. If you don’t feel comfortable doing this, ask your pastor to help you. Most Chinese pastors have experience removing and destroying idols from home, though mostly porcelain and not ivory ones. Hope this helps.