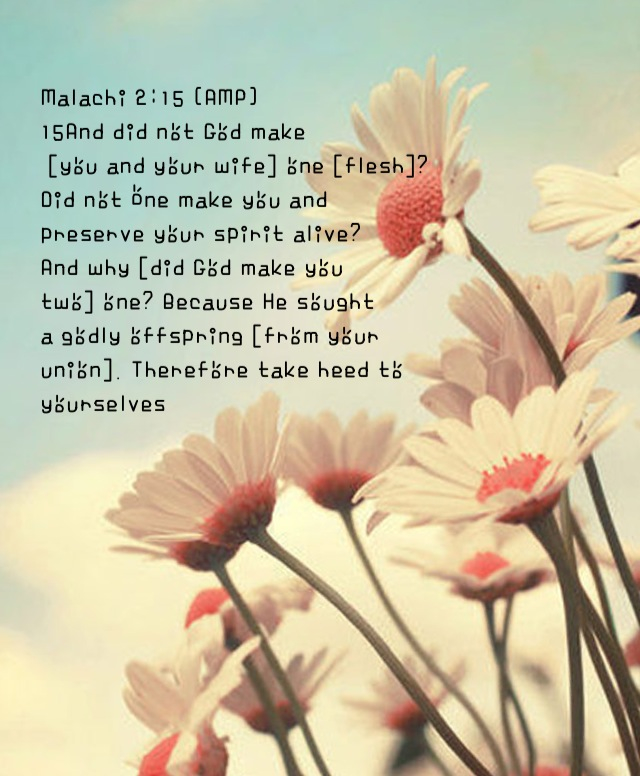 Q. Which interpretation is most accurate? They all convey different meanings:
• NIV Has not the one God made you? You belong to Him in body and spirit. And what does the one God seek? Godly offspring.
• ESV Did He not make them one, with a portion of the Spirit in their union? And what was the one God seeking? Godly offspring.
• KJV And did not He make one? Yet had he the residue of the spirit. And wherefore one? That He might seek a godly seed.

A. I studied only very little Hebrew, not enough to do proper translation. Using an interlinear does not help much as the word-for-word translation does not give you the word order in English sentences. Having said that, I would first take a look at the Amplified or Expanded Bible to see the range of possible meanings allowed by the text:

• Amplified Bible, Classic Ed. And did not God make [you and your wife] one [flesh]? Did not One make you and preserve your spirit alive? And why [did God make you two] one? Because He sought a godly offspring [from your union]. Therefore take heed to yourselves, and let no one deal treacherously and be faithless to the wife of his youth.
• Expanded Bible. God made [ Did not God make…?] husbands and wives to become one body and one spirit for His purpose—so they would have children who are true to God [godly offspring]. So be careful [ guard yourself in your spirit], and do not break your promise [be unfaithful] to the wife you married when you were young [ of your youth].

Language is not like numbers, with only one meaning within our decimal system. In translating, which possible meaning to use is the choice of the translators, subject to the context. With that as background, I would look at the 3 translations again and offer the following comments:

• NIV. In English, “you” can be either singular or plural. Does it mean the man who has been unfaithful to his wife (singular), or the husband and wife collectively (plural)? Mal 2:14-15 read, “You ask, “Why?” It is because the LORD is the witness between you and the wife of your youth. You have been unfaithful to her, though she is your partner, the wife of your marriage covenant. 15 Has not the one God made you? You belong to him in body and spirit. And what does the one God seek? Godly offspring. So be on your guard, and do not be unfaithful to the wife of your youth. So the NIV context indicates singular, the man who hates and divorces his wife.

• ESV. The ESV, on the other hand, says, “But you say, “Why does He not?” Because the LORD was witness between you and the wife of your youth, to whom you have been faithless, though she is your companion and your wife by covenant. 15 Did He not make them one, with a portion of the Spirit in their union? And what was the one God seeking? Godly offspring. So guard yourselves in your spirit, and let none of you be faithless to the wife of your youth. The ESV chose the plural, the man and his wife.

Which is more accurate? I can offer you only my opinion – I prefer the ESV. Of course the man is the guilty party in divorcing his wife, but the nature of his sin is in breaking the marriage covenant, where God joined two together to become one. For the man to divorce his wife not only does violence to her, but is an affront to God who joined them; hence my preference.

• KJV. While some are “KJV Only” as they believe all contemporary versions are less accurate, I feel they are too narrowly focused. I hold a conservative position, but I believe textual criticism has value in getting closer to the original meaning. As a minimum, I suggest using the NKJV instead of the KJV to avoid the burden of old English. Mal 2:15 in the NKJV reads, “But did He not make them one, having a remnant of the Spirit? And why one? He seeks godly offspring. Therefore take heed to your spirit, and let none deal treacherously with the wife of his youth.” The word “them” is not in the original Hebrew, but interpolated by the translators as the best meaning. As such, it is essentially the same as the ESV.

One thought on “Bible Versions”