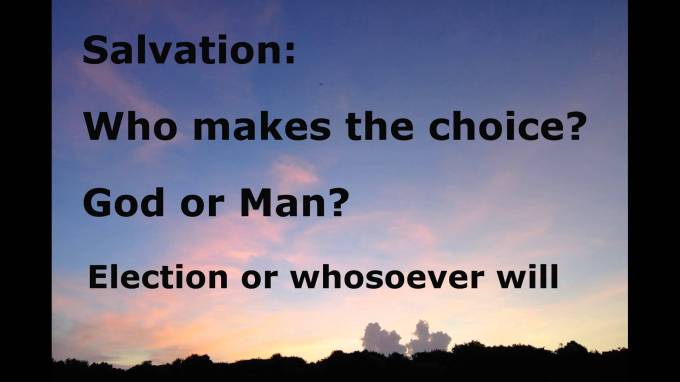 Yesterday we examined 3 out of 4 combinations of God’s choice versus man’s. Let’s look at the last one today:

The Calvinist view is that if God passes over an individual and leaves him to his devices, his fallen state is such that without the enabling of the Holy Spirit, he does not have the ability to choose Christ on his own. Arminians disagree, believing that though a sinner is spiritually sick, he still has the capacity to receive Christ. Who is correct?

Jn 6:44 says “no one can”. “Can” speaks of ability. No one has the ability to come to Christ “unless the Father draws him”. The precondition for coming to Christ is the Father’s drawing, His enablement. Why can’t he come on his own? Because he is “dead” according to Eph and Col. A spiritually dead person does not have the ability to respond to Christ’s invitation, unless the Father draws or enables him. Arminians feel that man has prevenient grace so that he is only sick and not dead, and can still choose to accept Christ. I don’t find this in Scripture. It is a view held by many who overvalued man’s ability and understated God’s sovereignty, but there is no biblical basis for it.

Furthermore, the Arminian position would lead to an absurd conclusion, a reductio ad absurdum. Let’s play along and assume that a non-elect person does have the capacity to exercise his free will to choose Christ. If man has the final say, he is saved despite God bypassing him. Man becomes sovereign, not God, which is wrong by definition. What if God has the final say? Since God did not choose him, He overrules the man’s free choice of Christ. This would make God a capricious despot denying eternal life to a person who receives Christ. That is certainly not the God of the Bible. So I am persuaded both by Scripture and logic that the Arminian position is untenable.

Finally, why would God waste time in letting us convert those predestined to hell? He wouldn’t waste time. We witness to all as we don’t know who the elect are, but we won’t succeed in converting the non-elect. They would either resist God’s offer of salvation, or there would be false conversion in which there is an emotional response which withers away, but no real life that perseveres because it does not abide in Christ. God permits such activities to train us to be obedient and sharpen our evangelistic skill. Plus we learn to be more Christ-like in the process as you pointed out. Hope this is clear.